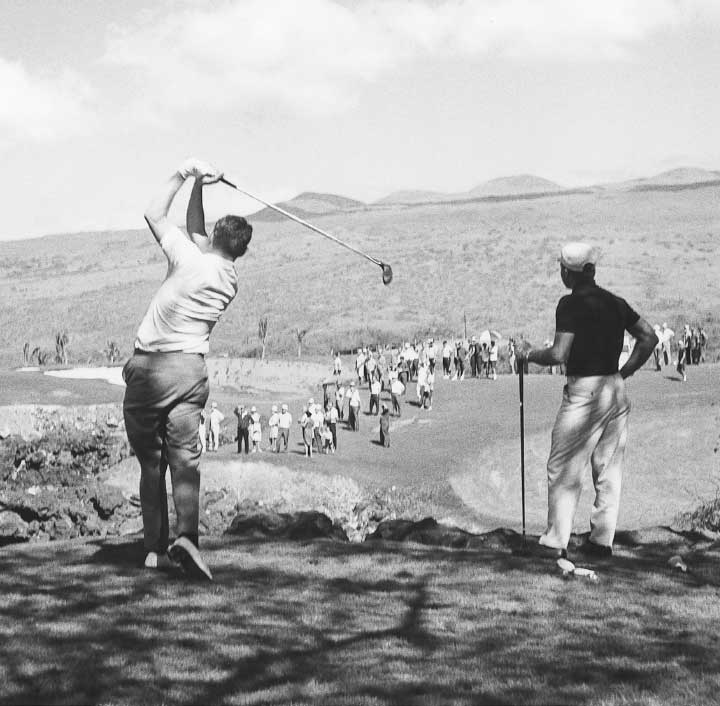 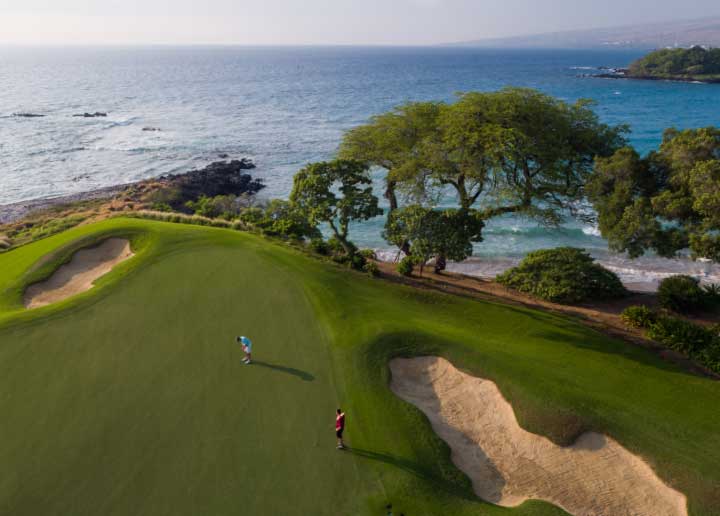 When Laurance Rockefeller decided to build the world’s finest resort along the Kohala coastline of the then undeveloped Mauna Kea (Hawaiian for White Mountain), he knew he needed a golf course worthy of his vision. He turned to Robert Trent Jones Sr., the preeminent designer of the day and the architect of more than 400 courses around the world.

As they overlooked the panoramic view of Kauna’oa Bay, Jones’ response was a promise that has become a golfing legend. “Mr. Rockefeller, if you allow me to build a golf course here, this’ll be the most beautiful hole in the world.” That hole, No. 3, was the promise kept.

Only fitting then, that to christen the course, Jones brought together the game’s Big Three — Arnold Palmer, Jack Nicklaus and Gary Player — for a Skins game broadcast nationwide on NBC. When the trio reached No. 3’s tee box it was set back 250 yards from the green — with 170 of those yards over the crashing azure waters of an inlet. Only Arnold Palmer reached the green. No. 3 was instantly iconic.

In 2008 Jones’ son, Rees, a celebrated architect in his own right, honed the jewel that left the routing untouched but moved and deepened the bunkers, added length and introduced new, state-of-the-art grasses. Today, more than 50 years after its 1964 opening, these 18, especially the legendary No. 3, are as unforgettable as when the Big Three stepped onto the tee.

“Mr. Rockefeller, if you allow me to build a golf course here, this’ll be the most beautiful hole in the world.”

The Hapuna Beach Residences are just steps from the clubhouse and first tee. Up the hill, the Hapuna Estates all front the course.

Hapuna Golf Course is a visually striking course that weaves through tall native grasses that contrast with dramatic mounds of 1,000-year-old black lava. The links-style layout, designed by Arnold Palmer and Ed Seay, takes full advantage of its elevation overlooking the Pacific. Stretching out to nearly 6,900 yards, every hole is postcard perfect and every one dazzles with views from Mauna Kea and Hualalai mountain peaks to the sparkling ocean. But no hole promises those fortunate enough to play it a view quite like No. 12. The tee, nearly 700 feet above sea level, offers players one of the island’s most spectacular panoramic views of the Big Island all the way to Maui in the distance. Concentrating on the course and not the scenery can be problematic.

Hapuna’s challenging play and environmental sensitivity make it one of Hawaii’s most unique golf courses. There are plenty of highlights, including each of the par fives. As you would expect from Arnold Palmer, each one is a signature, each with its own set of risk/reward opportunities. For long hitters, all four can be reached in two shots but the strategy must be carefully planned and the shot-making precise.

Arnold Palmer’s brazen style of play is exemplified in his design for No. 3. The fairway bends to the left all the way to the green but actually ends temporarily about 240 yards off the tee. The green is well protected, especially by the water on the left, so any shot onto this green, whether long or short, carries with it a sense of peril. 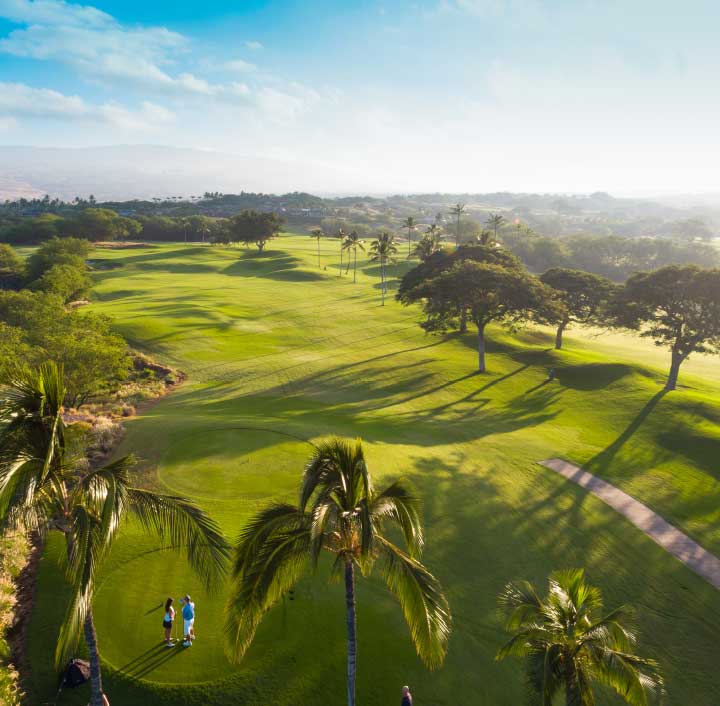 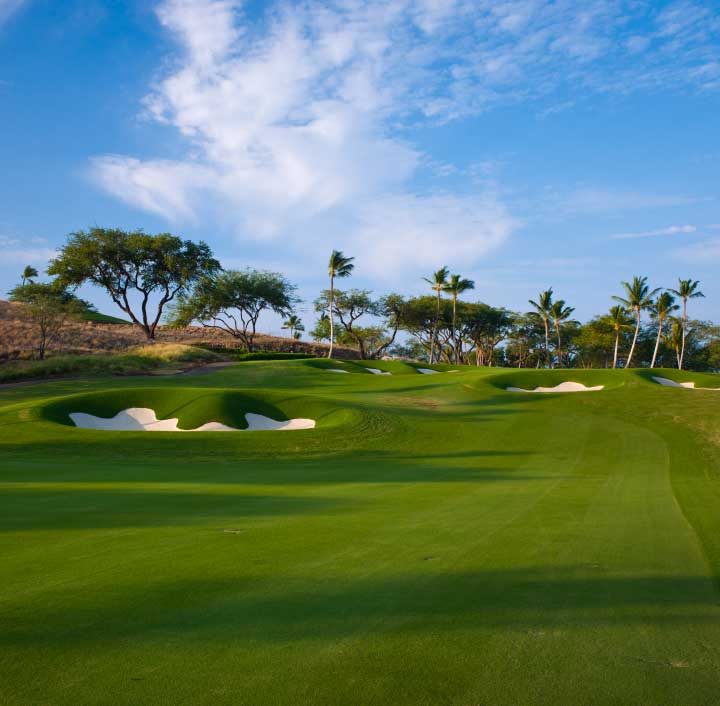 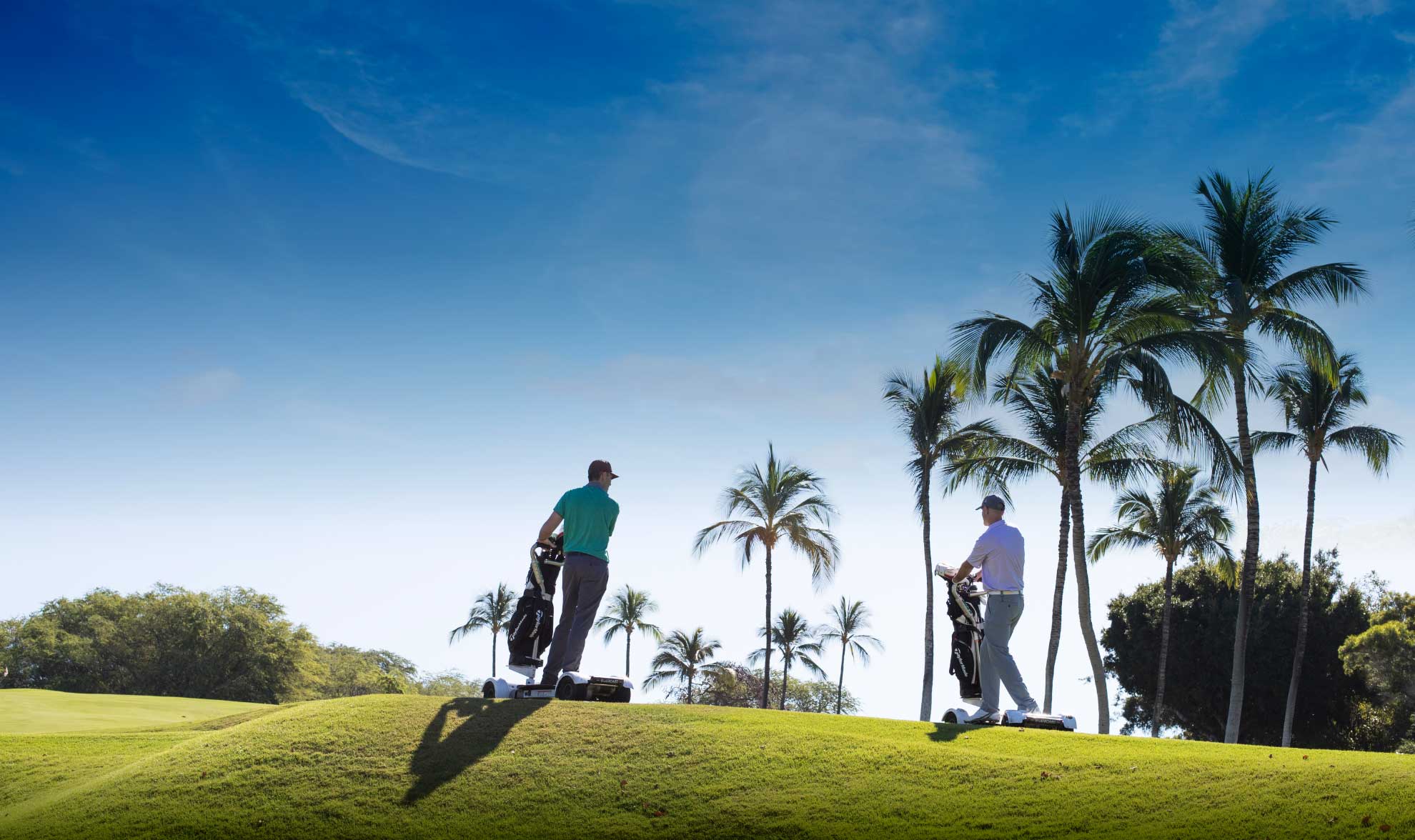 Inspired by two Hawaiian passions, the ancient art of surfing and the great game of golf, Golfboards have added a novel new element to the game – the ability to surf your way around the course. Far easier to master than when atop a wave, Golfboards add a joyful only-in-Hawaii element to your game along with the best possible way to experience the jaw-dropping views from Hapuna and Mauna Kea’s verdant fairways.

Explore the Club at Mauna Kea

We invite you to schedule your visit and learn more about all that is to come at Mauna Kea Resort, including the first release of Hapuna Beach Residences, the Hapuna Beach Villa and Hapuna Estates.